The Indianapolis Motor Speedway is celebrating the 100th anniversary of the Indy 500 with Sunday’s race, and Central New York has played a role — both kind and unkind — in the track’s storied history.

Back in the 1950s and’60s, Indy racing was ruled by long, tube-like roadsters powered by Offenhauser engines mounted in front of the driver. Their dominance ended when faster rear-engine European cars were introduced. 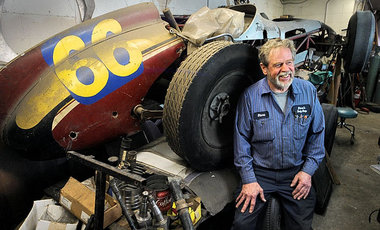 Race car fabricator Steve Miller of Mexico sits next to a 1961 roadster that raced the Indy 500 from 1961 to 1963. Miller will eventually restore the car to museum quality. Mike Greenlar / The Post Standard

So what happened to the old discarded roadsters? About a third of them ended up at Oswego Speedway, where they were converted — some say butchered — into short-track supermodifieds, and they helped establish Oswego as the “Indy of the East.”

Steve Miller, of New Haven, who has driven at Oswego, bought one of the roadsters for $75 in 1972. The car had won the pole at Indy in 1959 and had three top-five finishes in four years.

The roadsters ran at Oswego until 1978 before they again were cast aside by racers who were finding faster ways around the track by building their own cars.

Miller sold his car for $1,000 to a collector, Bob McConnell, of Ohio, who turned around and asked Miller to restore it to its original Indy condition.

“It is somewhat ironic that I had the dubious distinction of being so involved in butchering it into an Oswego supermodified and also got paid to restore it back to original,” said Miller, who owns a body shop in Mexico. 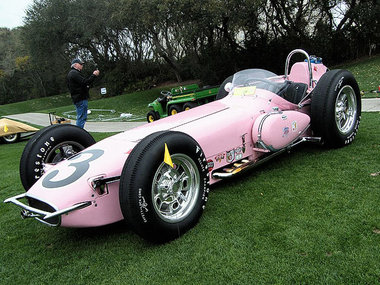 Steve Miller bought this Indy roadster in 1972, made it into a supermodified, sold it and later restored it for an Ohio collector. It won the pole at the 1959 Indianapolis 500. Courtesy of Bob McConnell

McConnell described the deal with Miller: “He had a car for sale and I bought it. That was years ago. He figured, ‘There goes a fool,’ but he ended up restoring that car and a number of others.”

Miller, who admits he had never given a thought to restoring the car, finished his first project in 1982-83. Since then, he has been steadily adding to McConnell’s huge private collection of Indy cars in Urbana, Ohio.

“We scoured the whole Northeast clear on up into Canada for anything that was an actual real Indy car that had run as a supermodified,” McConnell said. “We just pulled a trailer behind the truck. He (Miller) knew all the people and the contacts. In those many ensuing years he restored a number of them and still has a few to go.

“We got in on an early situation when nobody else wanted them.”

A couple of Miller’s restorations have been at Indy this month as part of the speedway’s centennial celebration.

There were only 103 roadsters built, and Miller has restored “about 20” of them, including the car that Rodger Ward drove to a fourth-place finish in the 1963 Indy 500.

Miller, now 66, drove that car on the 2½-mile track at IMS about a dozen years ago.

“What a kick,” he said. “The darned thing fired up and I put it in gear and started going out on the track and I’m going: ‘Oh God, I hope I don’t screw up.’

“I was learning how to drive the car, learning the controls and how it steers and all that. I’d never had any experience in that particular configuration ever before. So I’ve got to learn it, drive it and stay out of trouble (with 32 others cars) all at the same time.

“You know how wide Indy looks on television? Oh man, does it get narrow when you’re two and three wide in the corners!”

McConnell continues to fund Miller’s restoration work, which involves all but the cars’ engines. A couple of old-time mechanics in Indiana restore the four-cylinder “Offies.” A complete restoration typically takes two to three years.

“It couldn’t be done without him (Miller),” McConnell said, “because he has the knowledge of the history as it evolved through the supermodifieds.”

So are there more roadsters to restore?

“There’s quite a few in the basement to be done and there’s more out in Ohio to be done,” Miller said. “I could do this from now until the time I die and not get them all done.”