Koch Industries is a major polluter, with ongoing incidents and violations of environmental laws. Even when complying with the law, Koch companies can get away with heavy pollution.

Evidence published by Mother Jones senior editor Daniel Schulman in Sons of Wichita, the first biography on the Koch family, includes accusations from former Koch employees that violations of environmental law were systematic up to the highest levels of management. Koch’s resistance to federal investigations of environmental violations went as far as spying on federal officials involved in lawsuits against Koch. In discussions of possibly making Koch a publicly-traded company, a lawyer for Koch warned that taking the public would land all of Koch’s executives and board members in jail. 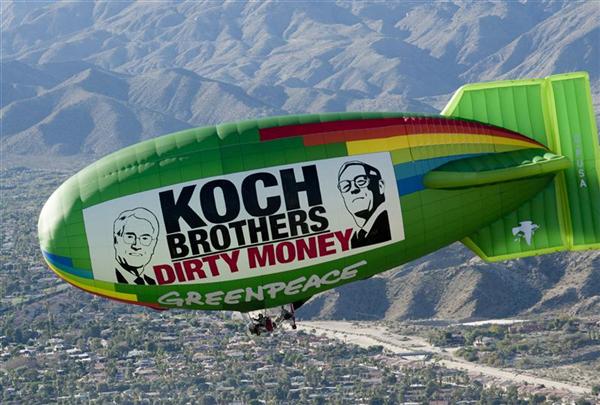 The Greenpeace Airship A.E. Bates flies over the location of oil billionaires David and Charles Koch’s latest secret political strategy meeting, with a banner reading “Koch Brothers: Dirty Money.” The aerial message is directed to arriving attendees of the meeting and highlights the Koch Brothers ongoing use of their vast oil profits to push a polluter agenda through campaign contributions, lobbying, and funding fronts groups and think tanks.