Growing up black in America

In the 1940s, when Nazi doctors went on trial for experiments on humans, the world heard the term “research crime” for the first time. Most Americans believed such abuses could never happen here. On a hot day in July 1972, however, the national front-page news described an experiment sponsored by the U.S. government.

In Macon County, Alabama, a large group of black men had gone untreated for syphilis. Over four decades, as some of them died, the United States government went to great lengths to ensure that the men in the “Tuskegee Study” were denied treatment, even after penicillin had become the standard of care in the mid 1940s.

The Tuskegee Study of Untreated Syphilis in the Negro Male was the longest experiment on human beings in the history of medicine and public health. Conducted under the auspices of the U.S. Public Health Service (PHS), the study was originally projected to last six months but wound up spanning forty years, from 1932 to 1972. The men were never told that they had the sexually transmitted disease.

The 600 black men in the study (399 with syphilis and a control group of 201) were the sons and grandsons of slaves. Most had never been seen by a doctor. When announcements were made in churches and cotton fields about a way to receive free medical care, the men showed up in droves. Little did they know the high price they would pay over the next four decades as they were poked and prodded by an endless array of government medical personnel. Even as some men went blind and insane from advanced syphilis, the doctors withheld treatment, remaining committed to observing their subjects through to the predetermined “end point” – autopsy. To ensure that their families would agree to this final procedure, the government offered burial insurance – at most $50 – to cover the cost of a casket and grave.

The project did not stop until Peter Buxtun, a former PHS venereal disease investigator, shared the truth about the study’s unethical methods with an Associated Press reporter. Congressional hearings into the conduct of the study led to legislation strengthening guidelines to protect human subjects in research. Fred Gray, a civil rights attorney, filed a $1.8 billion class action lawsuit that resulted in a $10 million out-of-court settlement for the victims, their families, and their heirs. 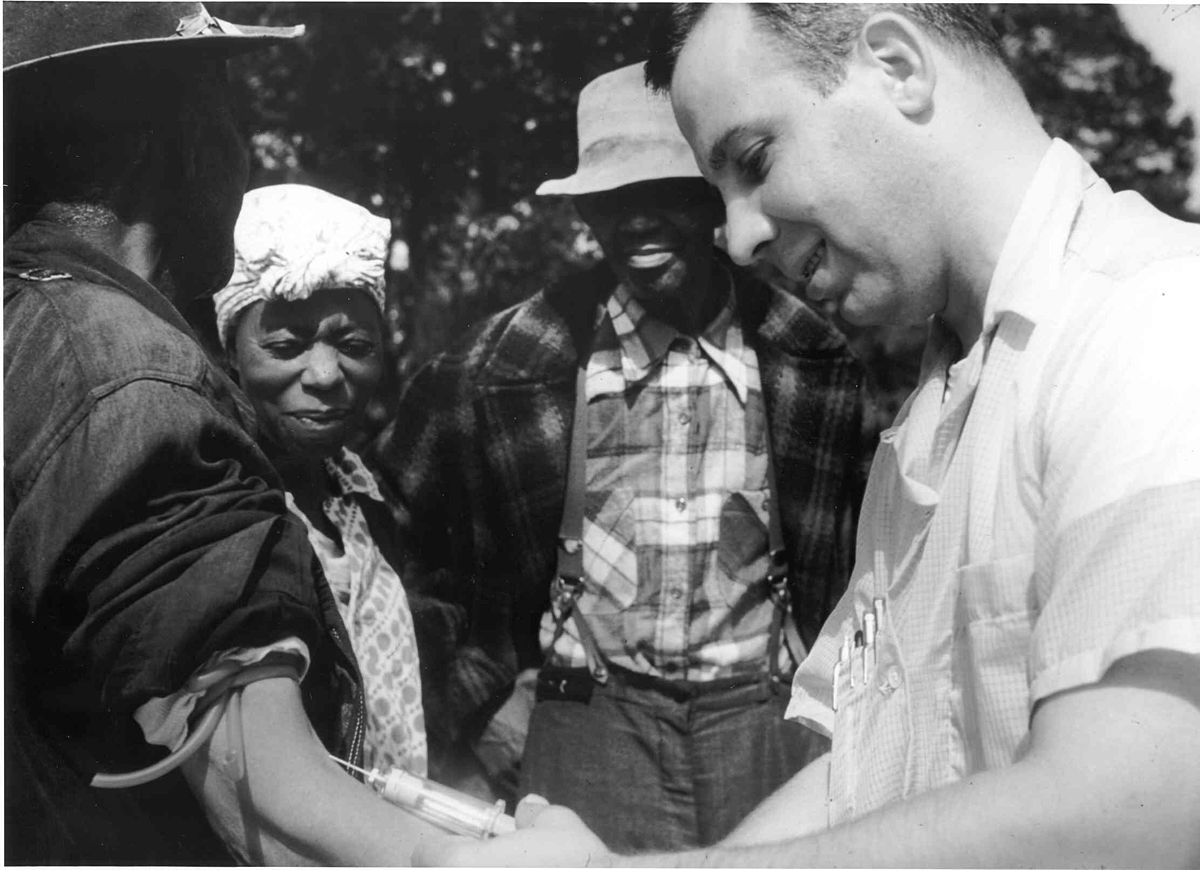 A doctor draws blood from one of the Tuskegee test subjects.

Miss Evers‘ Boys is a 1997 HBO television film starring Alfre Woodard and Laurence Fishburne, based on the true story of the decades-long Tuskegee experiment. It was directed by Joseph Sargent and adapted from the 1992 stage play written by David Feldshuh. The film was nominated for eleven Emmy Awards and won in four categories, including Outstanding Made for Television Movie.

The film tells the story of the Tuskegee experiment, a U.S. Federal Government secret medical experiment on poor African Americans in the years 1932-1972, designed to study the effects of untreated syphilis. The story is told from the perspective of the small town nurse Eunice Evers (Alfre Woodard) who is well aware of the lack of treatment, but feels her role is to console the involved men, many of whom are her close friends. In 1932 she is sent to help Dr. Brodus (Joe Morton) and Dr. Douglas (Craig Sheffer) to help them “treat” rural black men in the town of Tuskegee, Alabama. She is sent around town to tell the people that the government is funding their treatment for free, but unbeknownst to them the government will soon run a study that requires them to go without any form of real treatment. She then comes across 3 men in an abandoned schoolhouse: Willie Johnson (Obba Babatundé), Bryan Hodman, and “Big” Ben Washington, who agree for treatment. The study selected 412 men infected with the disease and promised them free medical treatment for what was called “bad blood”.The men received fake long term treatment, which involved giving them Mercury and placebos even after penicillin was discovered as a cure. When Caleb Humphries (one of the test subjects that left the experiment) joins the Army during World War II and is treated and cured by penicillin, he returns to tell how he was cured and tries to get help for his friend but none of the hospitals would help because the test subjects were placed on a list that stated they should not receive medical treatment because they were participants in the experiment. The survivors of the study did receive treatment and financial compensation after the Senate Investigation.

The video, The Deadly Deception, is a well-produced documentary on unethical behavior in government sponsored scientific research. The piece chronicles the forty year study of untreated syphilis in approximately 400 African-American men from Macon County, Alabama which began in 1932. The utilization of interviews with two survivors of the experiment, Herman Shaw and Charles Pollard, and experts in the fields of research, medicine, and civil rights, along with original film taken during the experiment, results in a believable and startling portrayal of the misuse of human subjects in scientific research.

The documentary creatively infuses a play about the now infamous experiment entitled “Miss Evers’ Boys” which helps the viewer to understand the lengths to which the United States Public Health Service (USPHS) went to keep the “experiment” in place and the deceit used against the men to retain their participation. In the play, Miss Evers is intended to represent one Eunice Rivers; Rivers was the nurse who served as a liaison between the men and the public health service and was a key player in encouraging their continued participation. In addition to Nurse Rivers, the USPHS used social institutions that the men trusted, such as churches and schools, to keep them involved in the study.