Growing up black in Nazi Germany

A young Hans J. Massaquoi standing in a schoolyard in Hamburg in 1933, wearing a swastika patch on his sweater

Young Hans, the son of a German nurse and a Liberian diplomat, managed to survive under Adolf Hitler’s Nazi regime. “I survived because of a loophole in racial laws. We weren’t such a significant number so as to be noticed by the Nazis,” wrote Massaquoi in his autobiography Destined to Witness: Growing Up Black in Nazi Germany.

Germany’s black population during the Nazi period was minimal—maybe a few thousand at most, among the 65 million people living in Germany at the time. Massaquoi was the grandson of the Liberian Consul in Germany, so his family was granted immunity and he was able to live among the Aryan population while anyone else considered by the Nazis to belong to an “inferior race” began to suffer the effects of Hitler’s repressive, xenophobic policies.

However, Massaquoi’s life began to change in the summer of 1934. “When I came to school one beautiful summer morning in 1934, our third grade teacher informed the class that the principal had given instructions for all the students and teachers to gather at the schoolyard,” he wrote. “Right there, dressed in the brown Nazi uniform I used to wear for special occasions, the principal announced that ‘the most splendorous moment of our young lives’ was about to come, that destiny had chosen us to be among the fortunate ones who would contemplate ‘our beloved Führer’ with their own eyes. That was a privilege, he assured us, that our yet to be born children, and our children’s children, would envy in times to come. I was eight by then, and I didn’t notice that, from the almost 600 kids gathered in that schoolyard, I was the only one Herr Wriede was not talking to.”

Massaquoi’s schoolmates were seemingly so taken in by the Nazi leader’s charisma that, after his visit, they all signed up to the Hitler Youth. Massaquoi didn’t want to be left out, so he also applied to become a member. He was not accepted.

A couple of years later, the xenophobic trend in German society became even more apparent. After African-American athlete Jesse Owens won four gold medals at the 1936 Berlin Olympic Games, Hitler and the rest of the National Socialist fanatics ramped up their rejection of black people. Soon after this, Massaquoi’s paternal family had to flee the country, while he remained in Germany with his mother. 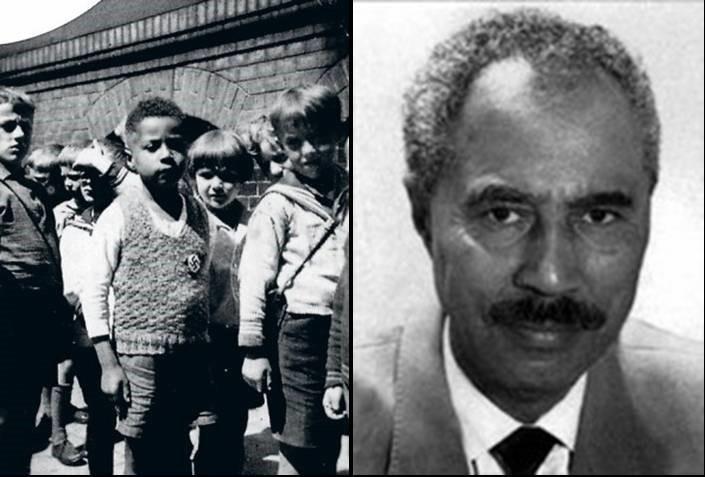 Hans as a child (left) and an adult (right).

But the nightmare had only just started. First, a notice placed on the swings of a park said “non-Aryan” kids were not allowed to play there. After that, teachers at school who were of Jewish origin began to disappear. But it wasn’t until young Massaquoi visited the Hamburg Zoo that the emotional connection he had felt towards Nazism was finally severed. Inside the zoo, in a cage placed outdoors among the animals, he discovered an African family being laughed at and teased by the crowd. Massaquoi had been just another kid fearfully approaching the cage, until somebody stood out from the crowd, pointed at him and yelled cruelly: “They’ve had a child.” That was the first time he had been the subject of public scorn.

In order to survive the country’s increasingly racist dogma, Massaquoi had to endure many insults to his person. Another peculiar episode in his life took place immediately after the beginning of the second world war. Massaquoi, who had been rejected by the Hitler Youth for being “unworthy to wear the German uniform,” was on the brink of being recruited by the German Army, an irony not lost on him. However, he was spared because he was underweight.

The end of the second world war led to another U-turn in Massaquoi’s life. During the post-war period, he initially made a living working as a jazz saxophonist, and then emigrated to the United States with a brief stopover at Liberia—his father’s homeland, where he was recruited by Uncle Sam to fight in the Korean War.

After his time as a paratrooper in the American army, he attended the University of Illinois, where he graduated with a degree in journalism. He worked as a journalist for more than four decades and served as a managing editor of Ebony magazine, the legendary African-American publication. “All’s well that ends well,” Massaquoi writes. “I’m quite satisfied with the way my life has turned out to be. I survived to tell the piece of history I was a witness of. At the same time, I wish everyone could have a happy childhood within a fair society. And that was definitely not my case.”

There was a book Destined to Witness: Growing Up Black in Nazi Germany (ISBN 978-0060959616), is an autobiographical book by Hans J. Massaquoi.

Destined to Witness, in German titled Neger, Neger, Schornsteinfeger (Negro, Negro, Chimney Sweep), was a great success in Germany, remaining on top of the bestselling list of the German weekly Der Spiegel for a couple of months. A screenplay was adapted from the book and movie shooting started in 2005. The film was run first on October 1 and 2 in 2006 as a two-parter on German ZDF TV channel.

The Film, In Two Parts, I and II