The two free Salems of Bunker Hill in the Revolutionary War, two of 100 black warriors at Bunker Hill

Tomorrow, for the 4th of July, we will look at the thousands of blacks in slavery that fought in the Revolutionary War on the American side and the British side and look at the promises of freedom which fell short.

Two Salems, one with a last name of Salem and one with a first name of Salem, two of 100 black warriors at Bunker Hill. Peter Salem is credited with killing British Major John Pitcairn, in the height of combat. Another casualty of the Salems was British Lieutenant-Colonel Abercrombie who was killed by Salem Poor. The two Salems are often confused with each other, but any way you look at it, the two helped win this battle along with 98 other black warriors. Some reports say as high as 150. There were some number of Native Americans there also.

Peter Salem (1750-1816) is depicted in the famous painting of John Trumbull titled, “The Death of General Warren at the Battle of Bunker Hill.” A stone monument was erected to Peter Salem at Framingham, Massachusetts in 1882. 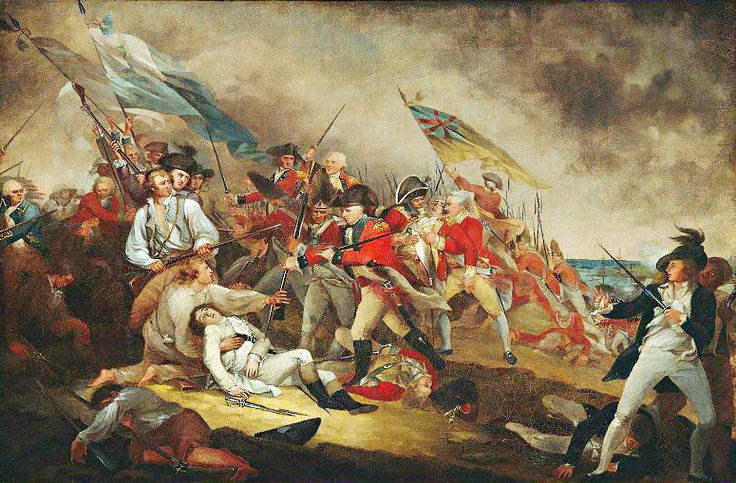 John Trumbull painting titled, “The Death of General Warren at the Battle of Bunker Hill.” Peter Salem is at the far right.

Peter Salem was born about 1750 to a slave mother in Framingham, Massachusetts. His master was Lawson Buckminster. When Buckminster became a major in the Continental Army, he gave Salem his freedom in 1775 so he could enlist in the patriot militia in what soon became the American Revolution.

Peter Salem was a member of the famous Massachusetts Minutemen and was involved in a number of important battles, including the battles of Bunker Hill, Concord, and Saratoga (the first American victory of the Revolution). However, it was in the Battle of Bunker Hill on June 17, 1775, that he gained notoriety.

After the battles of Lexington and Concord, American troops from Massachusetts, Connecticut, New Hampshire, and Rhode Island assembled at Boston to confront the 5,000 British troops stationed there. The outmanned American forces engaged the British outside the city. The Americans were winning the conflict until they began running out of ammunition. With the Americans near defeat, British commander Major John Pitcairn (who had earlier led the British forces against the Americans at Lexington) mounted the hill and shouted, “The day is ours!” whereupon Salem promptly shot him, sending the British troops into confusion and allowing the Americans to escape safely. Peter Salem was honored before General Washington for his soldierly act.

Salem became a member of the Fifth Massachusetts Regiment and served throughout the rest of the Revolution – a total of seven years of military service in behalf of his country, a length of time achieved by few other soldiers in the Revolution. Salem had entered the Revolution as a slave but finished it as a free man, marrying in 1783, at the conclusion of the Revolution.

African American patriot Salem Poor of Andover, Massachusetts fought with distinction in the American Revolution. He purchased his own freedom in 1769 for 27 pounds (about one year’s salary). Soon after, he married a freedwoman named Nancy by whom he had a son. In May of 1775 Poor enlisted in the Continental Army and distinguished himself at the Battle of Bunker Hill (Charlestown) where he was sent to assist in the building of fortifications. Six months later, white veterans petitioned the General Court of the Massachusetts Bay Colony to recognize Poor’s exemplary service at the Battle of Charlestown (Bunker Hill), citing that he had “behaved like an experienced officer.”   His comrades stated that in Poor “centers a brave and gallant soldier.”  “To set forth particulars of his conduct would be tedious.” Of the thousands of American soldiers at Bunker Hill no other was given such recognition.

Salem Poor had a tumultuous personal life after the Revolutionary War (see Wikipedia).

More blacks at The Battle of Bunker Hill are documented.