The earliest recorded protest against slavery was by the Quakers in 1688.

Quakers, also known as “The Society of Friends,” have a long history of abolition. But it was four Pennsylvania Friends from Germantown who wrote the initial protest in the 17th century. They saw the slave trade as a grave injustice against their fellow man and used the Golden Rule to argue against such inhumane treatment; regardless of skin color, “we should do unto others as we would have done onto ourselves.” In their protest they stated, “Pray, what thing in the world can be done worse towards us, then if men should robb or steal us away, & sell us for slaves to strange Countries, separating housband from their wife and children….”

Their protest against slavery and human trafficking was presented at a “Monthly Meeting at Dublin” in Philadelphia. The Dublin Monthly Meeting reviewed the protest but sent it to the Quarterly Meeting, feeling it to be too serious an issue for their own meeting to decide. The four Friends continued their efforts and presented at the Philadelphia Yearly Meeting, but it wasn’t until 88 years later that the Society of Friends officially denounced slavery.

Over the centuries, this rare document has been considered lost twice. Most recently it was rediscovered in 2005 and is now at Haverford College Special Collections. 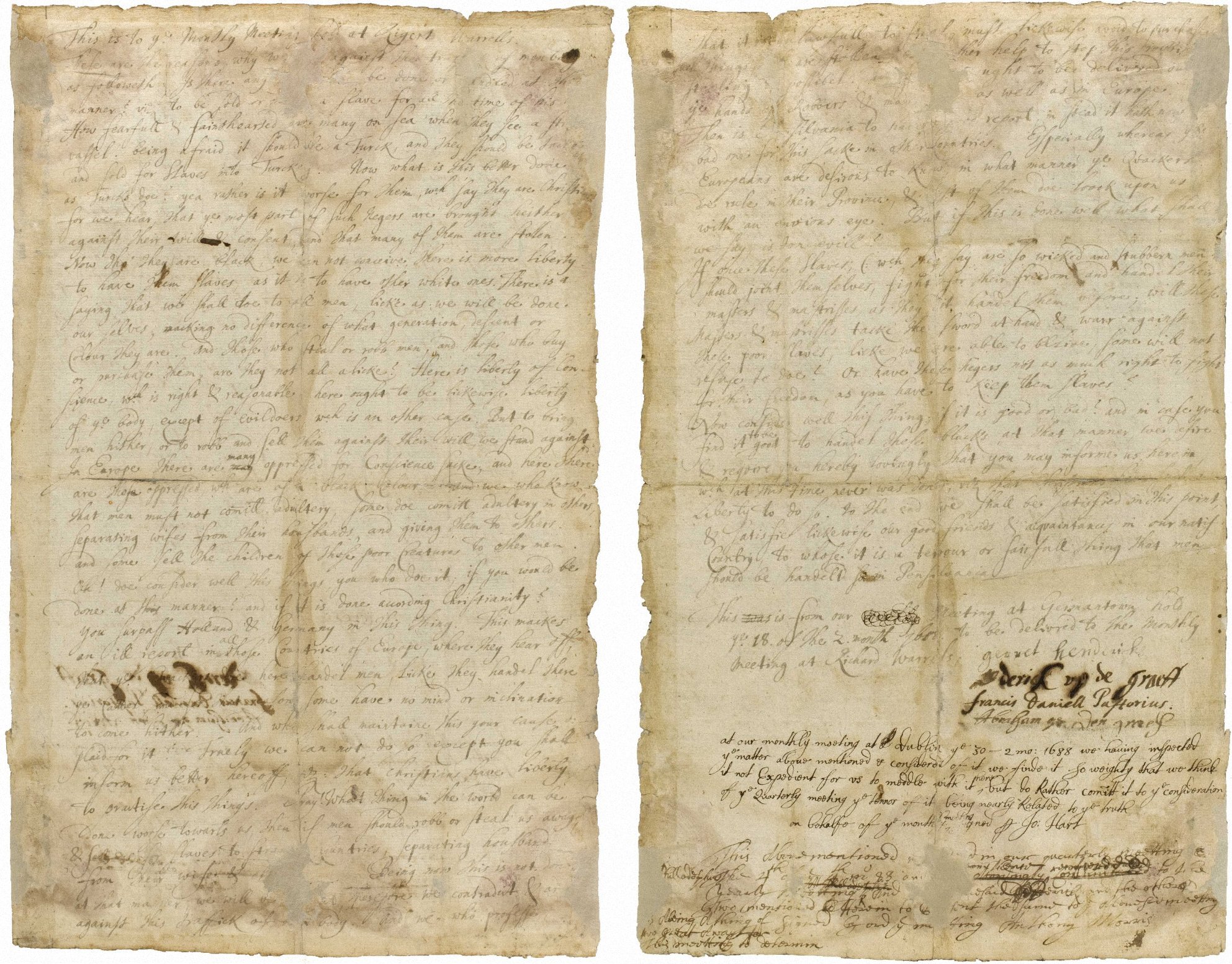 The two sides of the The 1688 Germantown Quaker Petition Against Slavery after conservation in 2007. It was written in iron gall ink and has substantially faded. The document was the first public protest against the institution of slavery, and represents the first written public declaration of universal human rights. The original document is 9″ x 14″. The Signatories are Francis Daniel Pastorius, Garret Hendericks, Derick op den Graeff and Abraham op den Graeff

A Minute Against Slavery, Addressed to Germantown Monthly Meeting, 1688.

This is to the Monthly Meeting held at Richard Worrell’s.

These are the reasons why we are against the trafficking of slaves, as follows. Are there any that would choose to be handled in this manner, for example, to be sold or made a slave for all the time of his life? How fearful and faint-hearted are many on sea, when they see a strange vessel, – being afraid it should be a Turk, and they should be taken, and sold for slaves into Turkey. Rather it is worse for them, for we say we are Christians; for we hear that the blacks are brought here against their will and consent, and that many of them are stolen.

Now, though they are black, we can not conceive there is more liberty to have them slaves, as it is to have other white ones. There is a saying that we shall do to all men like as we will be done ourselves; making no difference of what generation, descent or color they are. And those who steal or rob men, and those who buy or purchase them, are they not all alike? Here is liberty of conscience which is right and reasonable; here ought to be liberty of your body, except of evil-doers, which is another case. But to bring men here, or to rob and sell them against their will, we stand against.

In Europe there are many oppressed for conscience sake; and here there are those oppressed which are of a black color. And we who know than men must not commit adultery, – some do commit adultery, in separating wives from their husbands and giving them to others; and some sell the children of these poor creatures to other men. Ah! do consider this thing, you who do it, if you would be done at this manner? And if it is done according to Christianity? You surpass Holland and Germany in this thing. This makes an ill report in all those countries of Europe, where they hear of, that the Quakers do here handle men as they handle their cattle.

And for that reason some have no mind or inclination to come here. And who shall maintain this their cause, or plead for it? Truly we can not do so, unless you shall inform us better hereof, for example, that Christians have liberty to practice these things. What thing in the world can be done worse towards us, than if men should rob or steal us away, and sell us for slaves to strange countries; separating husbands from their wives and children. Being now that this is not done in the manner we would be done at therefore we contradict and are against this trafficking of slaves.

And we who profess that is is not lawful to steal, must, likewise, avoid to purchase such things as are stolen, but rather help to stop this robbing and stealing if possible. And such men ought to be delivered out of the hands of the robbers, and set free as well as in Europe. Then is Pennsylvania to have a good report, instead of have now a bad one for this sake in other countries. Especially whereas the Europeans are desirous to know in what manner the Quakers rule in their province; – and most of them look upon us with an envious eye. But if this is done well, what shall we say is done evil?

If once these slaves (which they say are so wicked and stubborn men) should join among themselves to fight for their freedom but not handle their masters and mistresses badly, will these masters and mistresses take the sword at hand and war against these poor slaves? Or have these blacks not as much right to fight for their freedom, as you have to keep them as slaves?

Now consider if this thing is good or bad. And in case you find it to be good to handle these blacks in this manner, we desire and require you hereby inform us that Christians have such a liberty to do so. To that end we shall be be satisfied in this point, and satisfy likewise our good friends and acquaintances in our native country, to whom it is considered a terror that men should be handled so in Pennsylvania.

This is from our meeting at Germantown, held on the 18th day of the 2nd month, 1688, to be delivered to the Monthly Meeting at Richard Worrell’s.