Frederick Douglass in 1867: “A man’s rights rest in three boxes: the ballot box, the jury box, and the cartridge box.” and how the National African American Gun Association eventually came about (see video below)

History of Guns in the African American Community

Starting in 1751, the French Black Code required Louisiana colonists to stop any blacks, and if necessary, beat “any black carrying any potential weapon, such as a cane.” If a black refused to stop on demand, and was on horseback, the colonist was authorized to “shoot to kill.” Because of fear of Indian attack, and the importance of hunting to the colonial economy, slave possession of firearms was at times a necessity in Louisiana. But the colonists had to balance their fear of the Indians against their fear of their slaves. As a result, French Louisiana passed laws that allowed slaves and free blacks to possess firearms only under very controlled conditions.

When the first U. S. official arrived in New Orleans in 1803 to take charge of this new American possession, the planters sought to have the existing free black militia disarmed, and otherwise exclude “free blacks from positions in which they were required to bear arms.

The end of slavery in 1865 did not eliminate the problems of racist gun control laws; the various Black Codes adopted after the Civil War required blacks to obtain a license before carrying or possessing firearms or Bowie knives;

When blacks finally gained the ability for legal ownership of a gun or rifle it was used in many cases to protect themselves from the local criminals and from those organized groups in society that wanted to attack, kill, intimidate, rape, and oppress them based on our skin color (KKK ). Historically this reality was repeated in numerous cities in the United States especially in the Deep South where the local Klan, Sheriff/Police, and majority populations often attacked African American Men, Women, and children based on their skin color. In some of those cases a gun was the sole item that saved African American lives. Even the original civil rights leadership publicly believed that, as Frederick Douglass put it in 1867, “a man’s rights rest in three boxes: the ballot box, the jury box, and the cartridge box.” With the rise of Jim Crow segregation at the end of the 19th century, civil rights leaders continued to advocate meeting fire with fire. “A Winchester rifle should have a place of honor in every black home,” the famed anti-lynching crusader Ida B. Wells-Barnett wrote in 1892, when on average more than one black person was lynched every three days in the South, “and it should be used for that protection which the law refuses to give.” Thousands of African Americans continued to fight for equality and one of the best-known civil rights organizations practicing armed self-defense were the Deacons for Defense and Justice, which was formally incorporated in Louisiana in 1965 with the explicit purpose of providing armed protection for civil rights activists, and the Black Panther Self Defense Party.

On July 10, 1964, a group of African American men in Jonesboro, Louisiana led by Earnest “Chilly Willy” Thomas and Frederick Douglas Kirkpatrick founded the group known as The Deacons for Defense and Justice to protect members of the Congress of Racial Equality (CORE) against Ku Klux Klan violence. Most of the “Deacons” were veterans of World War II and the Korean War. The Jonesboro chapter organized its first affiliate chapter in nearby Bogalusa, Louisiana led by Charles Sims, A.Z. Young and Robert Hicks. The Deacons emerged as one of the first visible self-defense forces in the South and as such represented a new face of the civil rights movement. Traditional civil rights organizations remained silent on them or repudiated their activities. They were effective however in providing protection for local African Americans who sought to register to vote and for white and black civil rights workers in the area. The Deacons, for example, provided security for the 1966 March Against Fear from Memphis to Jackson, Mississippi. Moreover their presence in Southeastern Louisiana meant that the Klan would no longer be able to intimidate and terrorize local African Americans without challenge. Eventually they organized a third chapter in Louisiana. The Deacons tense confrontation with the Klan in Bogalusa was crucial in forcing the federal government to intervene on behalf of the local African American community.

The Black Panther Party- Use of Firearms – 2nd Amendment Rights

The major difference in the structure of the Black Panther Party was that they they believed in Self Defense thru the use of Firearms and exercising their 2nd Amendment Rights as Americans. This was a dramatic view at that time. They established “armed ” patrols in Black communities with Rifles and Guns in full public view to monitor police activities and protect the residents from police brutality. It is the sole Black organization in US history of Black struggle against slavery and oppression in the United States that was armed and promoted a revolutionary agenda during the Sixties.

Presently 19% of African Americans nationwide own firearms. In 2015 this percentage is growing with Doctors, Lawyers, Dentists, Business Men and Women, Plumbers, Single Moms, Republicans, Democrats, and many more are all active firearm owners in today’s society. The perception and reality of African Americans owning guns is changing. In 2012 the “Pew Research Center conducted a national survey and found that only 29% of African American households viewed Guns as positive. In 2015 that same survey showed a dramatic jump to 59% where now a majority of African American families now see Guns as not only a positive but in many cases needed. In today’s society every member of our community if they want can legally purchase a “Gun”. African Americans in record numbers are now joining gun clubs, going to the gun range, active in outdoor hunting, and even participating in Competitive Shooting events. Single Black women are now one of the fastest growing demographic groups in the African American community for purchasing guns for home protection. The future is bright for active firearm ownership within our community now and for years to come.

The founder and President of the National African American Gun Association is Philip Smith. He is an African- American Gun enthusiast. He founded and started NAAG with the primary goal to expose, educate, and motivate as many African American men and women to go out and purchase a Firearm for Self-Defense and to take training on proper gun use. 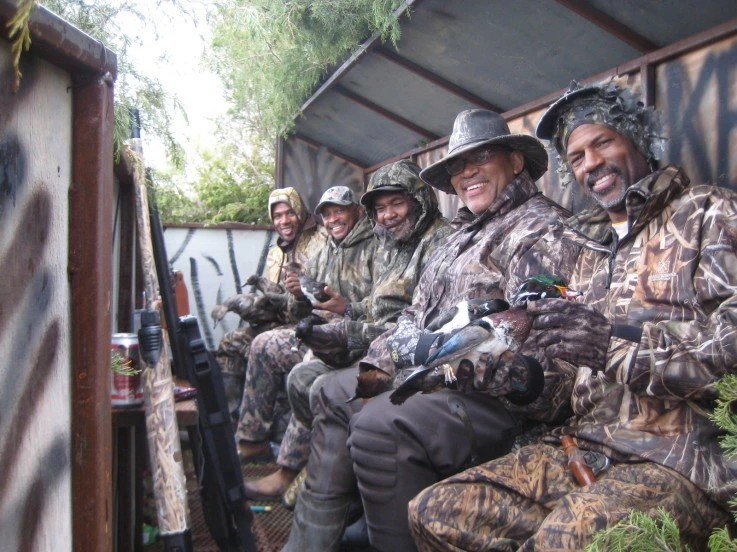