But almost every student of the war knows the decision to re-engine the P-51 Mustang with the British-designed Rolls-Royce Merlin was one of the era’s great flashes of genius. The Merlin-powered Mustang is sometimes called the plane that won the war. More or less arbitrarily, a decision was made to change the plane’s designation from XP-78 to XP-51B by the time of its first flight.

Today, conventional wisdom is that the American daylight bombing campaign over Europe succeeded only because U.S. fighters were able to defeat the German fighter force. Moreover, U.S. airmen defeated the Luftwaffe not by bombing its aircraft production, nor by attacking its fuel supply – neither move inflicted a knockout blow – but by killing its pilots. 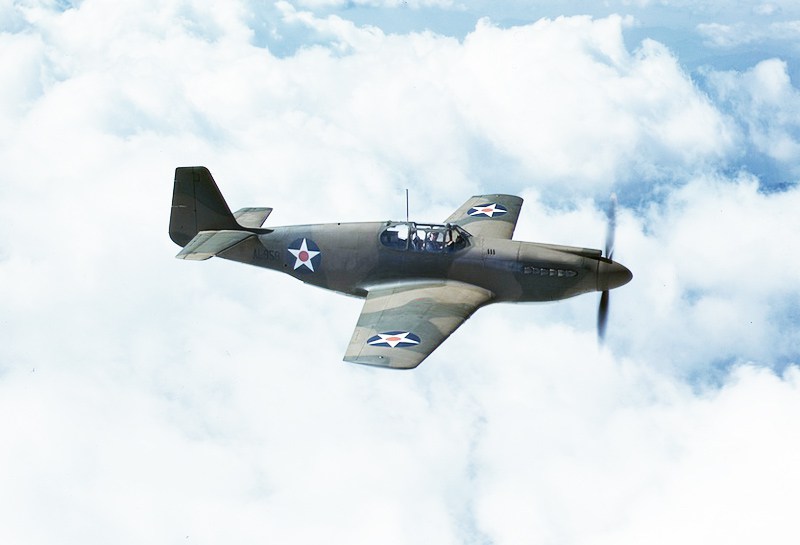 A British North American NA-73 Mustang Mk I (s/n AL968) being test-flown at Inglewood, Calif., ca. Oct. 1942. Equivalent to a P-51A, the aircraft’s Allison engine installation is easily identified by the different contour of the tight cowling without chin inlet beneath the propeller hub, and the carburetor air intake on top of the engine cowling. This plane was one of the original batch of 300 aircraft ordered by the Royal Air Force in December 1940 before the lend-lease act. Note that the fighter wears U.S. national insignia used by U.S. forces up to April 1942. Library of Congress photo by Mark Sherwood