Protester, 20, grabbed a policeman’s firearm at Las Vegas rally and said he wanted to KILL Donald Trump, after driving from California and learning how to shoot on a gun range the day before

A British man arrested at a Donald Trump rally in Las Vegas told authorities he tried to grab an officer’s gun so he could kill the billionaire Republican presidential candidate.

Anti-Trump protester Michael Steven Sandford, 19, even went to a gun range on Friday so he could learn how to shoot.

The 20-year-old, who was carrying a UK driver’s licence, was arrested at the Treasure Island Hotel and Casino on Saturday after going for a metro police officer’s gun. 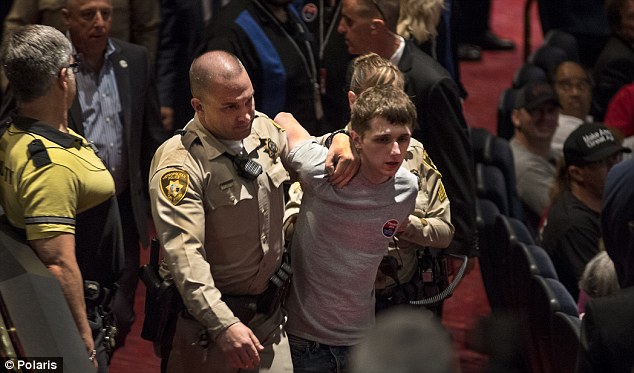 Michael Steven Sandford was taken out of the Trump campaign rally at the Treasure Island Hotel and Casino in Las Vegas on Saturday, after allegedly trying to disarm a police officer with the intention of killing Trump

Michael Steven Sandford, 19, even went to a gun range on Friday so he could learn how to shoot. He is pictured being removed from the rally 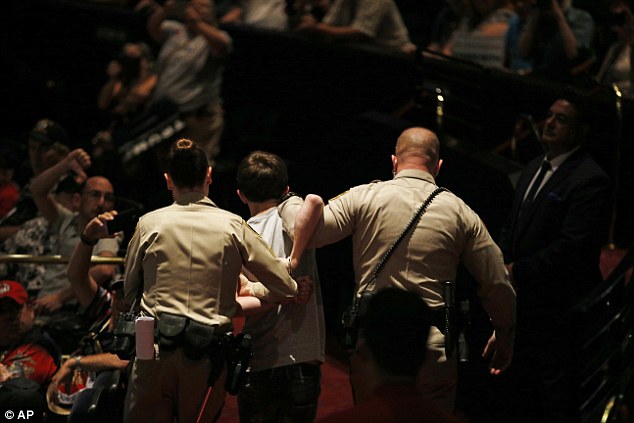 Sandford was arrested after allegedly grabbing the handle of an officer’s gun in an attempt to remove it.

Sandford was charged with an act of violence on restricted grounds, according to a complaint filed on Monday in US District Court in Nevada.

It cites a report by Special Agent Swierkowski, whose first name was not included, saying Sandford told officers he drove from California to kill Trump and went to a Las Vegas gun range the day before to learn to shoot.

Sandford later went to a Trump rally at Treasure Island and approached a Las Vegas police officer to say he wanted an autograph from Trump.

The report says Sandford was arrested after grabbing the handle of an officer’s gun in an attempt to remove it.

According to the complaint, Sandford had targeted officer Ameel Jacob’s weapon because it was in an unlocked position and would be the easiest way to acquire a gun to shoot Trump.

Court papers read: ‘Sandford further stated that if he were on the street tomorrow, he would try this again.

‘Sandford claimed he had been planning to attempt to kill Trump for about a year but decided to act on this occasion because he finally felt confident to do it.’

The British national had lived in Hoboken, New Jersey, for around 18 months and had driven to San Bernardino in California before heading to Las Vegas on Thursday.

The teenager told police he visited the Battlefield Vegas shooting range on Friday where he fired off 20 rounds from a 9mm Glock pistol to learn how to use it.

Sandford also told investigators he had a ticket for a Trump rally in Phoenix, Arizona, for later on Saturday as a back-up. 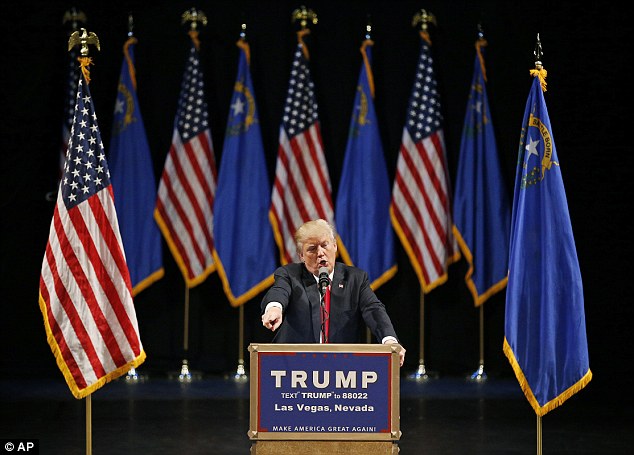 Trump spoke to a crowd at the Treasure Island hotel and casino, seemingly oblivious to the drama that was unfolding in the audience 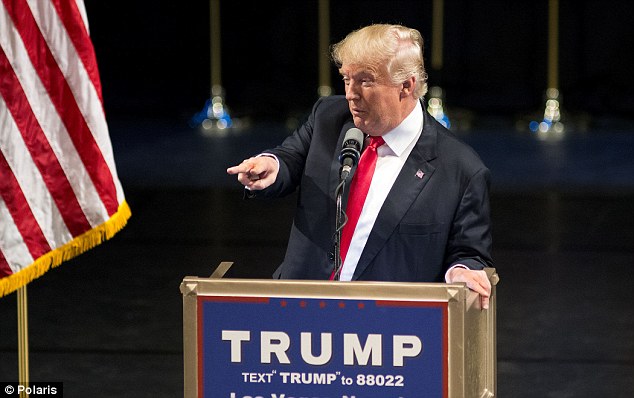 Donald Trump speaks at a campaign rally in a packed 1,600-seat theater at the Treasure Island Hotel and Casino where he declared the Orlando massacre demonstrated the need to fight terrorism

Authorities said on Saturday that law enforcement officers were able to take Sanford into custody with little disruption.

The court heard from a public defender that Sandford is autistic, while his mother told federal magistrate judge George Foley that he had been treated for obsessive compulsive disorder and anorexia when younger.

Despite living in Hoboken for 18 months, he did not have permission to be in the US and was unemployed.

The judge declined to grant bail to Sandford, pending a further hearing, saying the accused was a risk to the community and a flight risk.

The Trump campaign directed questions to U.S. Secret Service, which did not immediately respond to a request for comment.

A spokesman for Britain’s Foreign Office said: ‘We are providing assistance following an arrest of a British national in Las Vegas.’