James Armistead Lafayette, African American spy of the Revolutionary War that was one of George Washington’s most successful.

After receiving his freedom, he moved nine miles south of New Kent, bought 40 acres of land, and began farming. He later married, raised a large family, with many Lafayette descendants today, and was granted a $40 annual pension by the Virginia legislature for his services during the American Revolution. He lived as a farmer in Virginia until his death on August 9, 1830. 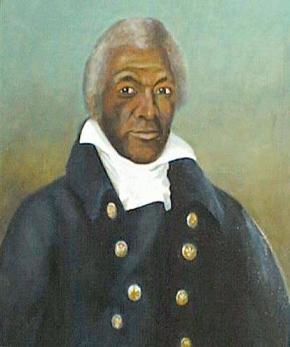 James Armistead was an African American spy during the American Revolution. Born in Virginia as a slave to William Armistead in 1760, he volunteered to join the Army in 1781. After gaining the consent of his owner, Armistead was stationed to serve under the Marquis de Lafayette, the commander of French forces allied with the American Continental Army. Lafayette employed Armistead as a spy.  While working for Lafayette he successfully infiltrated British General Charles Cornwallis’s headquarters posing as a runaway slave hired by the British to spy on the Americans.

While pretending to be a British spy, Armistead gained the confidence of General Benedict Arnold and General Cornwallis. Arnold was so convinced of Armistead’s pose as a runaway slave that he used him to guide British troops through local roads. Armistead often traveled between camps, spying on British officers, who spoke openly about their strategies in front of him. Armistead documented this information in written reports, delivered them to other American spies, and then return to General Cornwallis’s camp.

In the summer of 1781, General George Washington sent a message to General Lafayette, instructing him to keep his forces strong and to inform him of Cornwallis’s equipment, military personnel, and future strategies. Lafayette sent several spies to infiltrate Cornwallis’s camp, yet none proved able to produce valuable information for him until he received Armistead’s reports dated July 31, 1781. The information in these reports helped Lafayette trap the British at Hampton. Later that summer Armistead’s reports helped the Americans win the battle at Yorktown, prompting the British to surrender.

After the Revolution, Lafayette praised Armistead for his dedication and instrumental role in the surrender at Yorktown.  Armistead returned to William Armistead after the war to continue his life as a slave, as he was not eligible for emancipation under the Act of 1783 for slave-soldiers (he was considered a slave-spy). In 1784, Lafayette found Armistead in Virginia and was disappointed to find he was still a slave.  Lafayette wrote a testimonial on Armistead’s behalf and two years later the Virginia General Assembly emancipated him. It was at this time that Armistead made “Lafayette” his last name, in honor of the General.