INDIANAPOLIS (AP) — Indiana Gov. Mike Pence smiled for the TV cameras this month as a technology company announced plans to hire hundreds of new workers and add its name to the tallest tower in the Indianapolis skyline. Then the celebratory news conference took an awkward turn.

Scott McCorkle, the CEO of Salesforce Marketing Cloud, used part of his time at the microphone to advocate for expanded LGBT rights. It was a not-so-subtle rebuke of a policy Pence championed more than a year earlier that provoked national backlash and threats by some businesses to leave the state.

Indiana‘s financial outlook has improved since Pence took office less than four years ago, but the Republican is facing a tougher than expected battle to keep the job in the reliably red state for reasons that have little to do with economics. 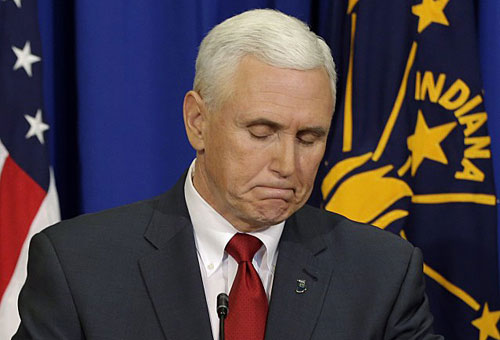